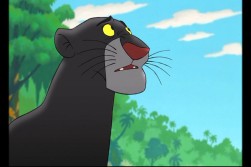 in the book, Bagheera is one of the animals that teaches Mowgli the law of the jungle. He also spoils Mowgli and helps rescue him from the Bandar-log.

Here, Bagheera is the tritagonist. In the movie, it is Bagheera that finds Mowgli, not the wolves. He is also very serious. When Bagheera heard that Shere Khan has returned to the jungle, he volunteered to take Mowgli back to the man-village. However, Mowgli wants to stay in the jungle. After climbing up a tree to sleep, Kaa, the snake tries to eat Mowgli. Bagheera intervenes and saves Mowgli. Shortly after Mowgli tries to join the dawn patrol, they get into an argument, resulting in Bagheera leaving Mowgli alone.But upon hearing a roar, quickly rushes back to Mowgli's aid, thinking he is in trouble. Much to his disdain, he discovers that the roar is none other than Baloo, who was playing with Mowgli.

The next morning, Bagheera hears Baloo calling for Mowgli. Bagheera comes to find that Mowgli has run away, having felt betrayed by Baloo. Both animals rush off the find Mowgli. During the search, Bagheera runs into Colonel Hathi and his patrol, and enlists their help in finding Mowgli. But in doing so, he tips off Shere Khan, who was hidden nearby, that Mowgli is lost and alone.

Bagheera does not appear until after Shere Khan has attacked Baloo, who was defending Mowgli. Believing Baloo to be dead, Bagheera eulogizes him, only for Baloo to awaken, calling for more. Bagheera is annoyed, going so far as to call the bear a fraud, but Mowgli is overjoyed. Bagheera later watches as Mowgli is lured into the man-village by a young girl. Pleased that Mowgli is safe, he heads back to the jungle with Baloo.

In the second film, Bagheera's role is not as big. He, with the help of Colonel Hathi's troops, tries to prevent Baloo from reaching the man village. When the villagers are searching for Mowgli, he correctly suspects that Baloo has brought him back. Baloo hides Mowgli from him, making Bagheera believe that he wasn't with him. After Shere Khan was trapped, Mowgli meets him again. Near the end of the film, Ranjan was shown playing with Bagheera's tail. At first Bagheera was scared, but later enjoyed playing with him, while Mowgli, Shanti, and Baloo sing the reprise of "The Bare Necessities".

Retrieved from "https://bigcat.fandom.com/wiki/Bagheera?oldid=3509"
Community content is available under CC-BY-SA unless otherwise noted.