Felicia is Ratigan's fat, spoiled pet cat and the tertiary antagonist of Disney's 1986 film The Great Mouse Detective. Ratigan keeps her happy by feeding her henchmen that make him mad and hostages. She was voiced by Frank Welker.

She is first seen when Ratigan is mad at his henchman, Bartholomew, for accidentally calling him a rat so he throws him outside and summons her with a bell. Bartholomew is heavily drunk, so he doesn't notice her walking up behind him. The thugs reactions when Ratigan is about to ring the bell to summon her, as well as Ratigan's comment of "You know what happens to people who upset me," likewise implies that this was not the first time Ratigan executed a thug for upsetting him via Felicia. In addition, Ratigan also made an implied threat to feed the rest of his minions to Felicia if they didn't continue with their praising song of him. She catches him and eats him. Later, after Fidget tells Ratigan that he lost the list he gave him, he sends Felicia after him and she tries to eat him, but Ratigan figures he could still be useful, so he has her spit him out. When the henchmen arrive at the queen's palace, they use her as a vehicle and Fidget tries to feed the queen to her. Later, she's interrupted by Basil's dog, Toby, who chases her away. She manages to escape from him by scrambling up a brick wall where Toby cannot follow. Thinking she has escaped, Felicia flicks her tail at him as she hops over but is attacked by the royal guard dogs on the other side. Bits of fur and the bow in her hair are seen flying through the air. It is unknown whether or not she survived, although some subsequent comic stories show her to be alive still. 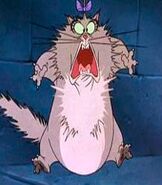 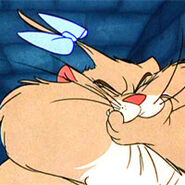 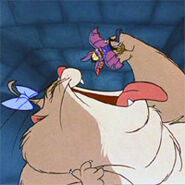 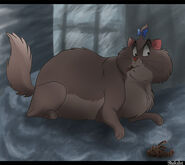 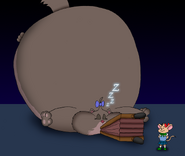 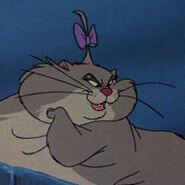 Add a photo to this gallery
Retrieved from "https://bigcat.fandom.com/wiki/Felicia?oldid=4204"
Community content is available under CC-BY-SA unless otherwise noted.