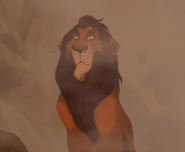 Scar is the main antagonist of the 1994 disney film The Lion King.

The first time we See Scar is right after Simba's presentation where Zazu warns him Mufasa approaches, so he'd better have a good excuse for missing the ceremony. Scar tries to eat the bird for pestering him but Mufasa orders him to drop Zazu. The King asks Scar about his whereabouts where Scar replies he simply forgot; That it 'slipped his mind'. He complains about not being first in line anymore due to Simba's existance and Mufasa makes it clear that as his son he is the future King. Scar sarcastically replies he'll practice his curtsy and turns his back on Mufasa, something the older lion doesn't like and snaps at him for. Scar retorts that he shouldn't turn his back on him. Mufasa takes this as a challenge and dominates Scar. Scar says he meant no harm by the statement, and continues on his way.

Scar only appears twice, the first time in Simba's nightmare. In the nightmare, Mufasa clings to the cliff above the stampede as in the first film, and Simba tries to reach down to help his father. However, Scar appears on the ledge and grabs Simba's paw, preventing him from reaching Mufasa. Scar laughs, suggesting Simba trust him and let Mufasa fall. Mufasa falls into the stampede and the cackling Scar morphs into Kovu. Kovu flashes an evil grin and throws Simba into the stampede, as Scar had done to Mufasa in the first film. He appears again when Simba banishes Kovu from the Pridelands. As Kovu looks into a stream, he sees Scar's reflection rather than his own. Given that Kovu had rejected defending his legacy, the young lion flees the vision in panic.

In the Broadway musical based on the original film, Scar is portrayed by a human actor in an African-style costume with a lion-face headpiece mask that comes down over the actor's face using a hidden remote control along with the use of a cane. Scar was originally portrayed in the Broadway production by John Vickery, and is currently played by Patrick Page. Dan Donohue portrays this character on the Broadway tour.

Scar's role is expanded upon with the song "The Madness of King Scar". In it, Scar begins doubting his reign, fearing that he might be losing the respect of the lionesses and that he needs a queen. He attempts to seduce Nala, who rebukes him by scratching his face.

Besides appearing in various The Lion King video games, Scar (スカル, Sukāru?) also appears in the Disney and Square Enix game Kingdom Hearts II as the primary villain of the Pride Lands world, voiced by James Horan. Much like in the film, Scar murders Mufasa to become king, and under his reign, the Pridelands suffers a drought and food becomes scarce.

Thinking Scar to be defeated, the protagonists are surprised when, as Pete explains, Scar returns to battle once again as a Heartless. Scar's anger and jealousy were so strong they lingered after death and consumed him. During the battle Scar uses a series of swift and strong physical attacks and powerful magic against Sora and company. Sora and his friends defeat Scar again. Scar is the only character in the Kingdom Hearts universe - excluding Xehanort - to keep his original form as a Heartless. Whether or not a Nobody will be fleshed out in Kingdom Hearts continuity is debated.

By the time Sora returns to the Pridelands to see how Simba is faring, rumors of Scar's ghost haunting the Pridelands have driven Simba into doubt. But once he overcomes this problem, the "ghost" is revealed to be the interaction of Simba's lack of confidence and Scar's spirit. Multiple copies of Scar's "ghost" then combine to form a gigantic Heartless that is eventually killed by Simba and Sora.

Retrieved from "https://bigcat.fandom.com/wiki/Scar?oldid=3175"
Community content is available under CC-BY-SA unless otherwise noted.